On Friday, GMEdd.com published clues that Loopring has the technology that GameStop would require to bridge traditional e-commerce and blockchain and engineer the revolution of gaming.

Since then, Loopring has been hard at work to prepare for the team’s anticipated Q4 2021 launch, and has pushed new code to its GitHub repository labeled “NFT feature”.

GitHub is a popular platform amongst developers that is typically used for version control. It is helpful when more than just one person is working on a project.

While Loopring made progress towards their NFT Marketplace launch, updates were pushed to a public GitHub repository.

On Tuesday, code was committed to the Loopring GitHub repository by Loopring developer W. Tang. 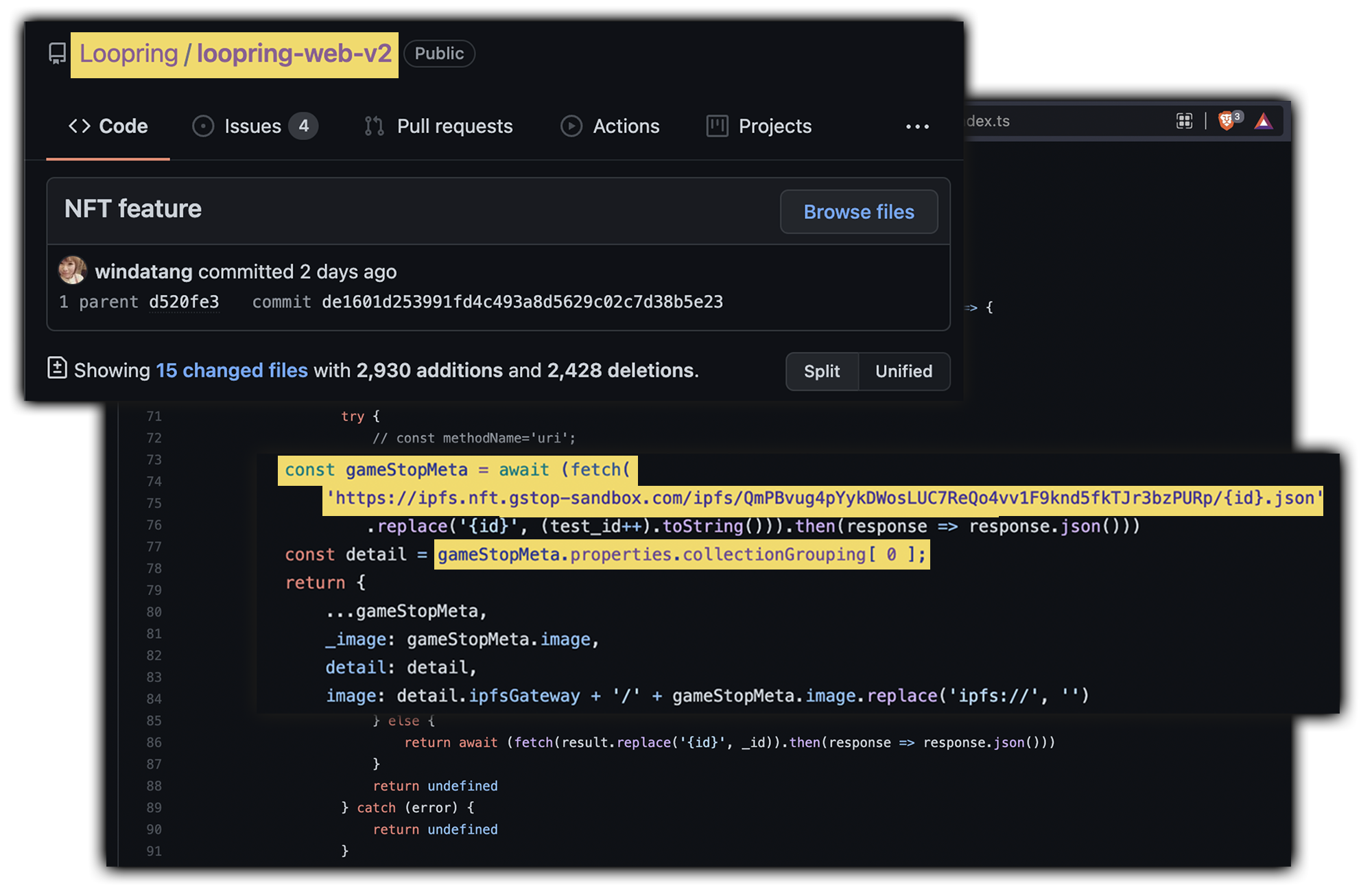 The amended code in the branch “NFT-DEV” under the GitHub commit titled ‘NFT feature‘ makes reference to “gameStopMeta” and an IPFS URL.

IPFS is a distributed system for storing and accessing files, websites, applications, and data. IPFS was noted to be used by GameStop previously during their first NFT project reveal. 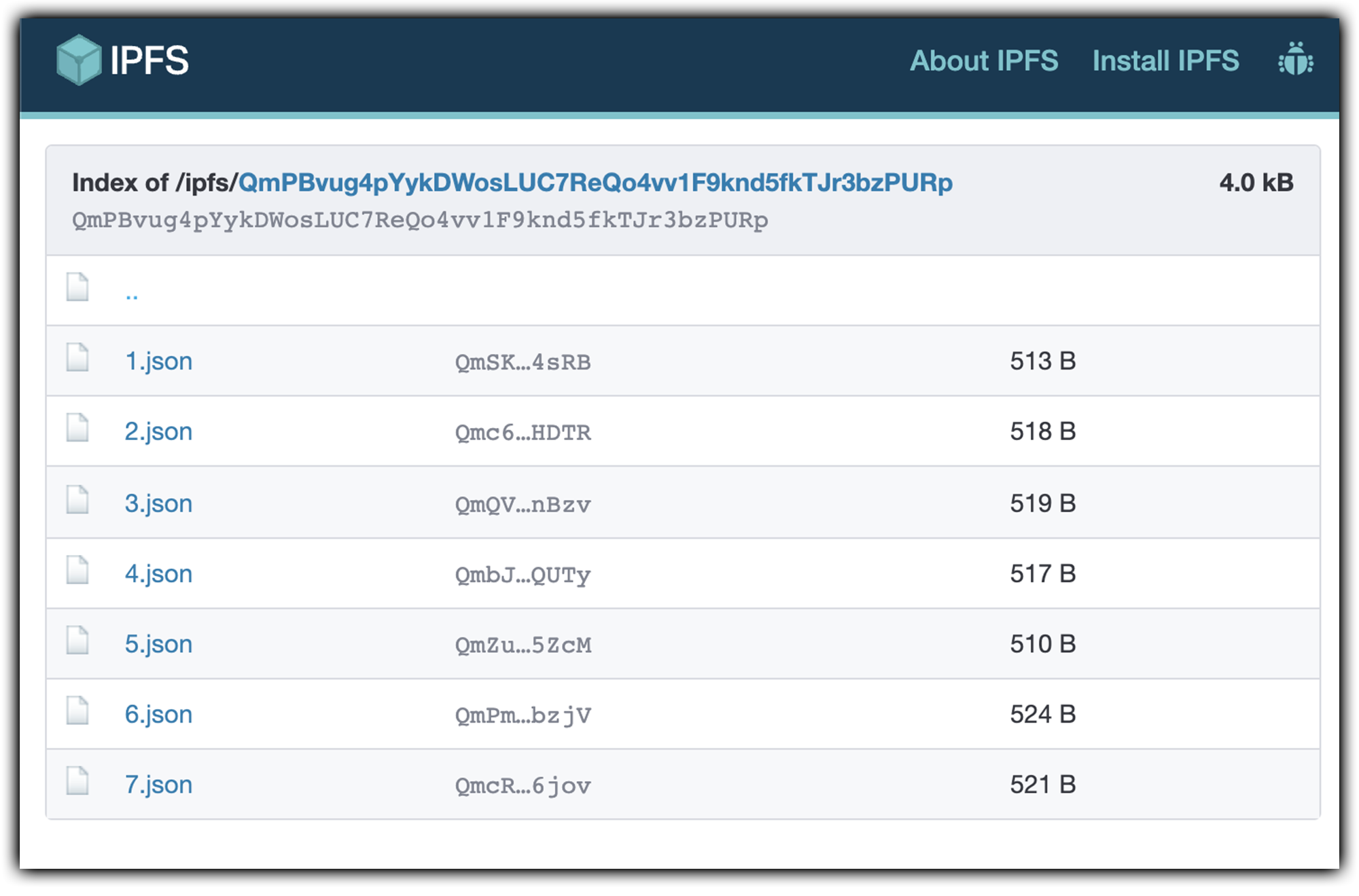 The IPFS URL resolves to a directory with 7 .json files that contain “Hello World” placeholder code in various graphic styles.

Hello World is a common sample text designed to familiarize users with most programming languages. 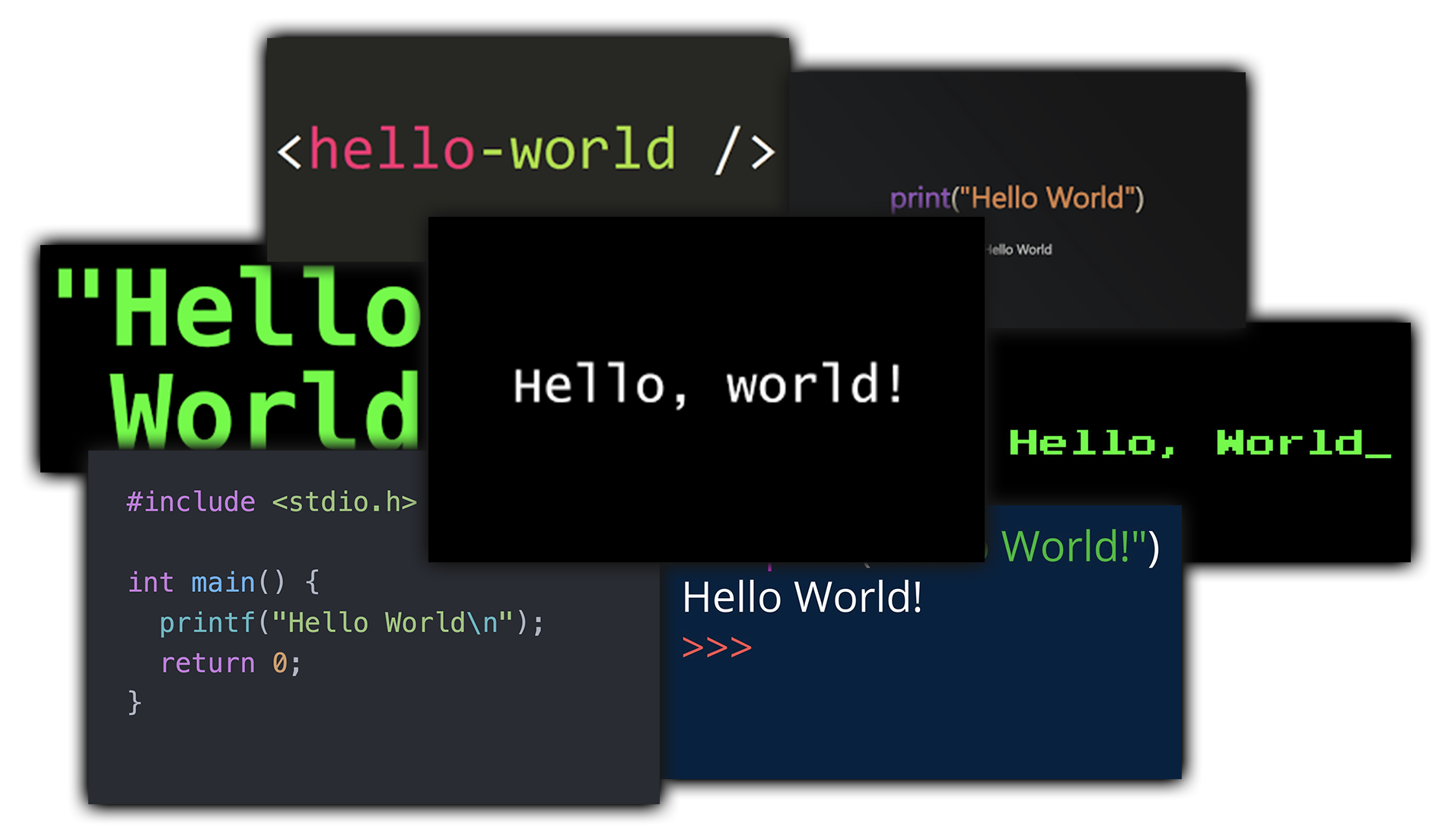 Power to the creators

Also found within the JSON files are references to “creatorRoyaltyBips,” with a value of “500”.

Bips, otherwise known as basis points, are a unit of measure used in finance to describe the percentage change in the value of financial instruments.

A fractional basis point such as the 500 bips referenced in the code is equivalent to 5%. These findings suggest GameStop’s NFT marketplace will allow for resale of digital assets, including the ability to pay royalties to the original creator on future transactions.

This aligns with the slogan revealed on NFT.GameStop.com from May.

Power to the players.

Power to the creators.

Power to the collectors.

EIP-1155: Putting the Fun in Fungible

The code posted on GitHib reveals that GameStop NFT is built on EIP-1155 which allows the creation of Fungible, Non-Fungible, and Semi-Fungible in one single token standard. 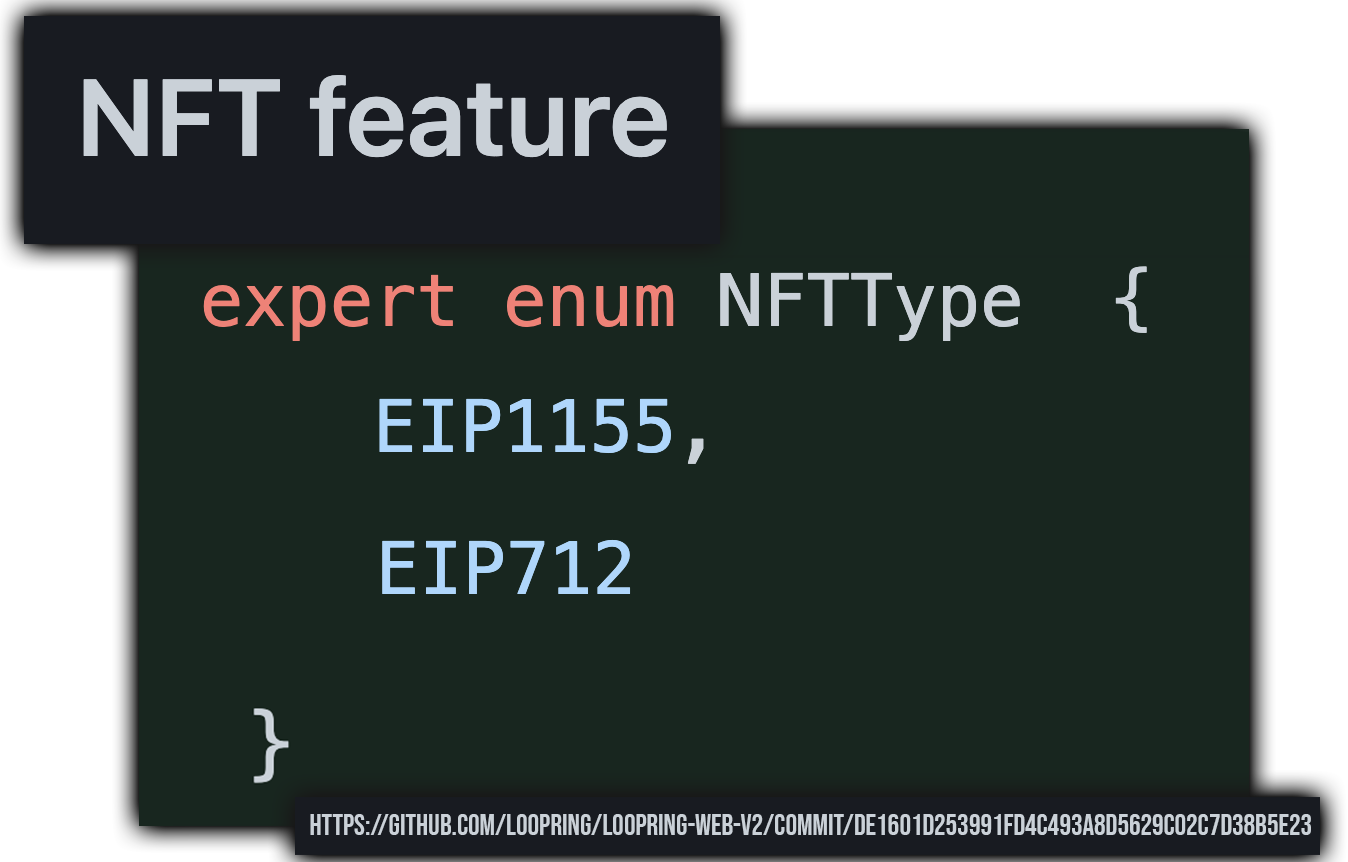 ERC-1155 is a unique token that supports non-fungible (NFTs) and fungible tokens. It’s faster and more efficient than prior iterations.

This allows flexibility to create unique “non-fungible” items, such as rare collectibles, artwork, in-game items and “fungible” items such as in-game currency, points or cosmetic items that can be owned by many people.

The second NFTType reference is to EIP-712, a secure method of signing a transaction on Ethereum.

While at Chewy, Ryan Cohen led the stealth “Project Bear,” committed to disrupting the $9B pet pharma industry. Despite Cohen’s departure 3 months earlier, Chewy did not roll out or even announce the initiative until it was completely ready for launch. 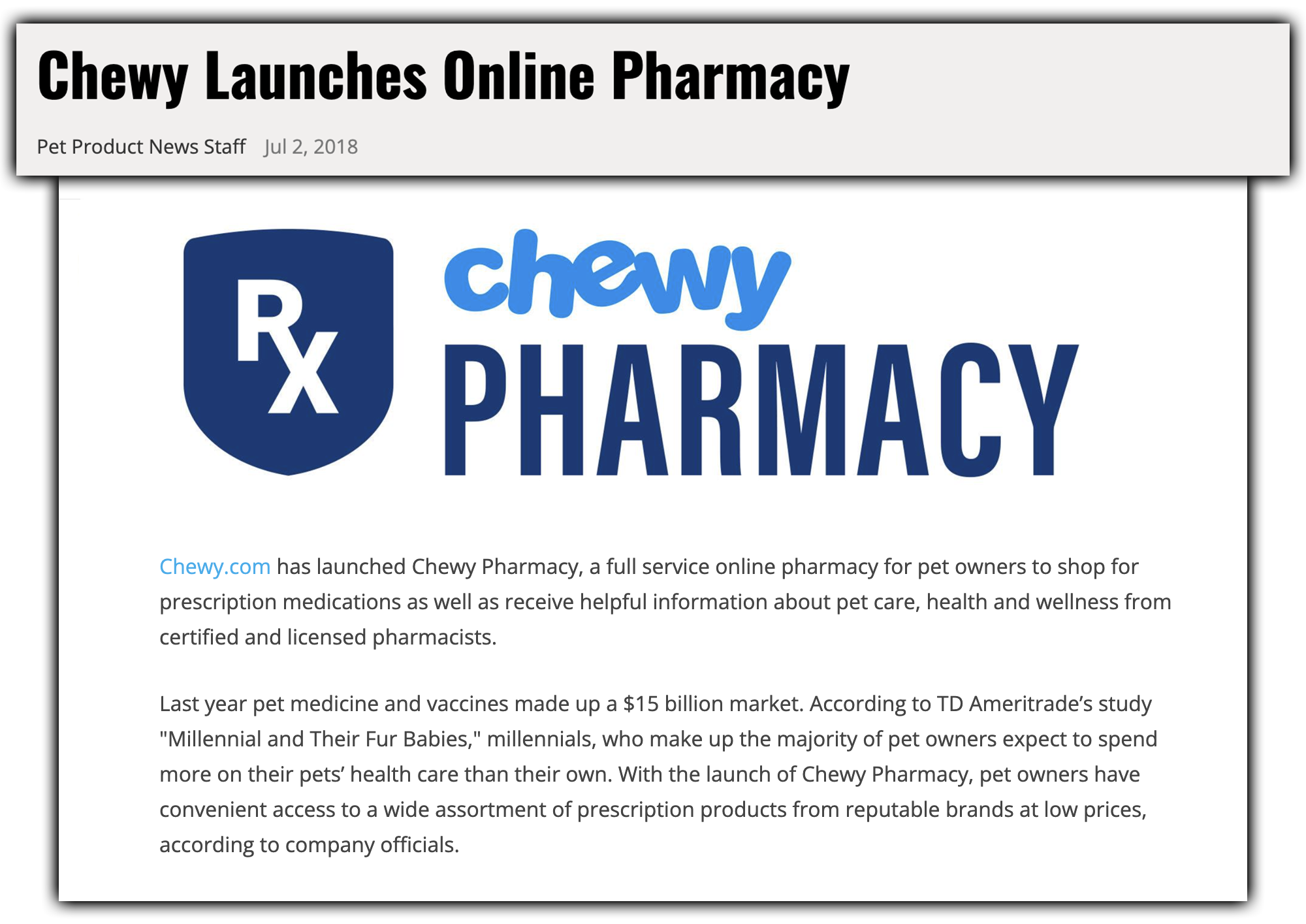 It is likely that GameStop will not make any splashy public reveals about GameStop NFT until the offering is finalized, following the same playbook as Chewy.

Fortunately, CHWYdd.com was unavailable at the time to break Project Bear news before release.

The full application of GameStop’s NFT Marketplace and the kinds of assets that will be offered for trading remains unclear.

Loopring has disclosed a launch date “at some point in Q4 2021,” and the partnership appears keen on disrupting the $150B gaming industry.

As GMEdd.com curated this piece, Loopring’s loopring-web-v2 public repository and IPFS links were taken down, leading our sources to point to archived versions.

Consider donating to support research and buy our contributors a coffee.