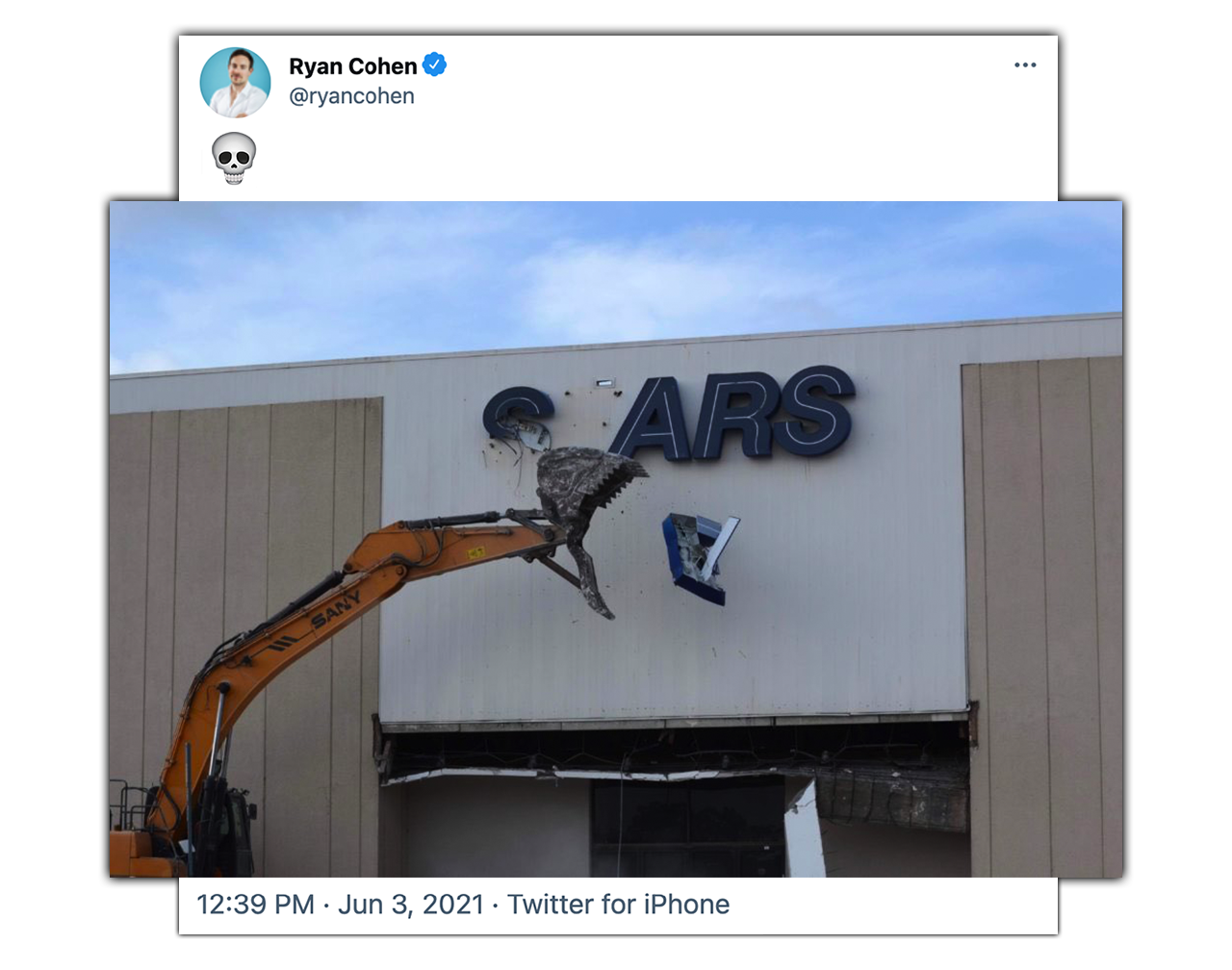 At 12:39 PM ET, Ryan Cohen has tweeted once again. This time, it’s a photo of a SEARS big-box retail store being torn down for good.

On the surface, parallels can be drawn between Sears’ rise and fall through an unchanged retail experience and GameStop’s past, but speculators have begun to dig deeper and look for hidden meaning in the tweet.

The photo originates from an article titled Former Sears Demolition Begins in Uptown District to Make Way for New Innovation Community Development in the Tampa Innovation paper. We already know GameStop is likely cementing themselves in Florida, but this information alone is not enough to substantiate a connection. 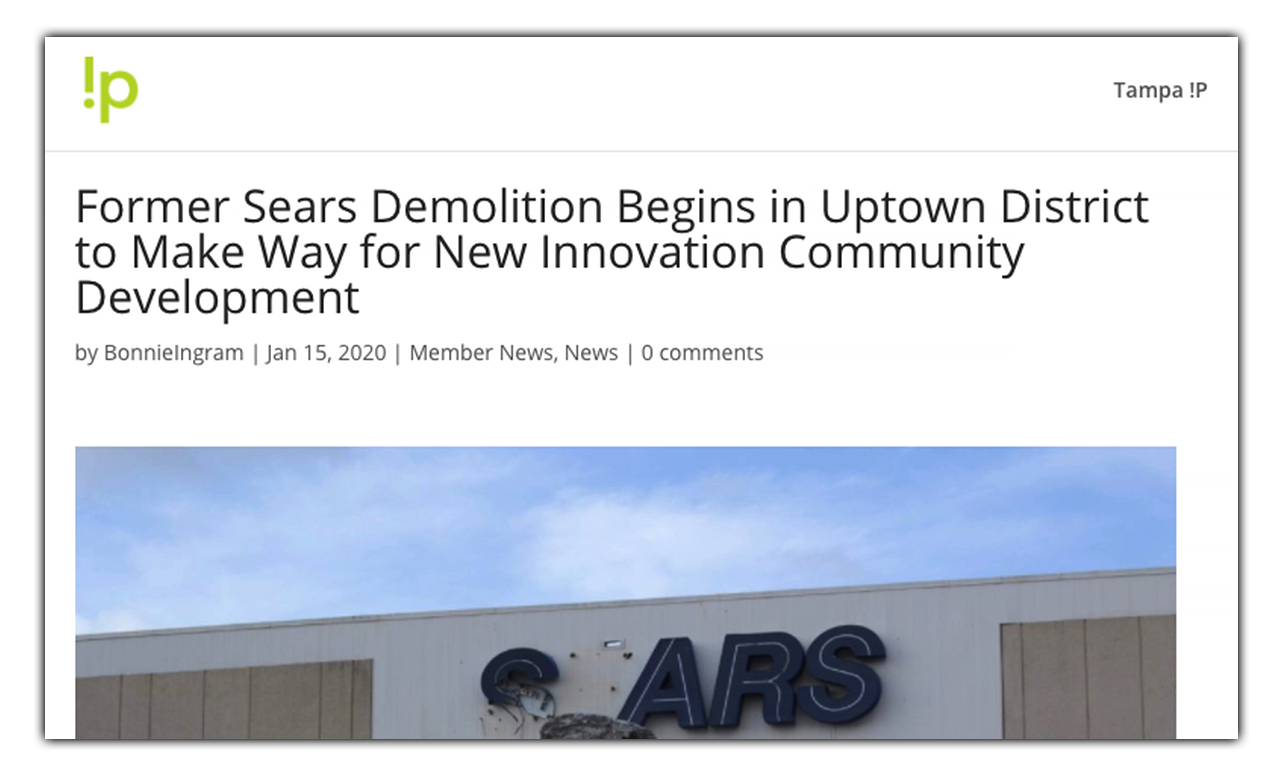 This urban renewal project… will shift from the property’s traditional retail origin and fully leverage the Innovation Community potential driven by its world-class, academic, scientific, and technology neighbors.

What is also striking is that Ryan Cohen and Chewy are no strangers to reimagining old Sears stores, as seen through Kelli Durkin’s retweet of a 2018 article by Bizjournals. 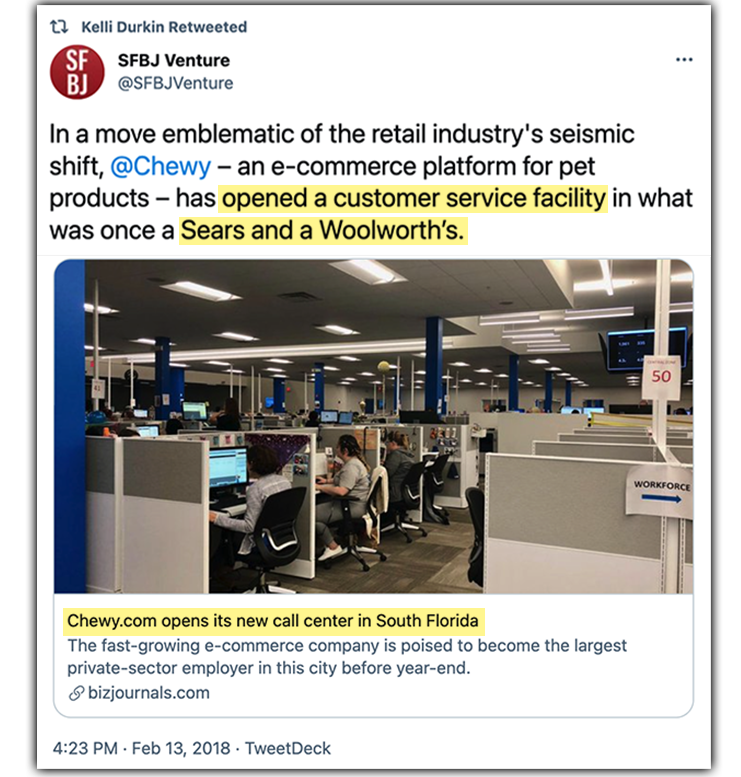 In a move emblematic of the retail industry’s seismic shift, Chewy – an e-commerce platform for pet products – has opened a customer service facility in what was once a Sears and a Woolworth’s.

Investors have also speculated that the final remaining letters on the SEARS logo, ‘ARS’, could reference the SEC Form ARS. Security & Exchange Commission (SEC) Form ARS, or the Annual Report to Shareholders, is a document used by a public company to report its latest financial performance to its shareholders shortly before its annual shareholders’ meeting.

As revealed as early as Q4 2020 earnings and confirmed yesterday, GameStop’s annual shareholders’ meeting is on Wednesday, June 9th. While this is an uncanny coincidence, GameStop has long replaced the considerably less informative Form ARS with the more comprehensive Form 10-K, so this would have to be released in conjunction.

In GameStop’s Fourth Quarter and Fiscal 2020 Results News Release, the Company revealed that they intend to “modify its method of communicating its quarterly financial results.” In a move similar to Chewy, GameStop announces that future financial results will accompanied by a presentation to include detailed supplemental highlights. Could this be the Form ARS the incoming GameStop Chairman may be referencing?

Let us know your thoughts in the comments and in the GMEdd.com Discord Server.